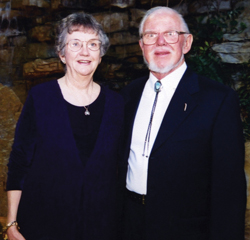 William E. "Bill" Horst (Met E '51 and '52) and his wife, Margaret Ann, have contributed $250,000 for a “gift that gives back” to create an endowed fund for metallurgical engineering faculty at Missouri S&T.

Their charitable remainder trust establishes the William and Margaret Ann Horst Endowed Faculty Development Fund in Metallurgical Engineering, which will primarily be used to help junior faculty establish their research programs and help all faculty stay current in their fields. With a charitable remainder trust, payments go to the donor (or anyone of the donor’s choosing) for life or for a designated period, after which the remainder is received by Missouri S&T.

Bill's interest in giving junior faculty a boost in their research and teaching efforts comes from personal experience, as he spent seven years as an instructor and associate professor in metallurgical engineering at the University of Arizona. “It is important that junior faculty have the opportunity to establish themselves and their work in research and teaching,” Bill says. “We hope our endowed fund will prove valuable in the continuation of excellence in the department.”

Bill received his Ph.D. in metallurgical engineering at the University of Arizona in 1967. He retired in 1984 as a vice president and research director of AMAX Extractive Research & Development, Inc. Bill was inducted into the Missouri S&T Mines and Metallurgy Academy in 1997 and for the past seven years has served as the chairman of the Splendido Residents Scholarship Committee providing scholarships for Splendido employees and their children. Bill and Ann have been members of the Order of the Golden Shillelagh giving society since 1991, and Bill has served on the executive committee.