Giving Back with the Gift of Academic Opportunity 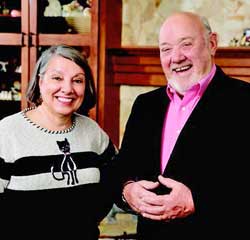 Richard Jaquay, CE’63, and his wife Barbara are global adventurers who are grateful for the career success that made it possible to see the world. They have visited 40 countries and every continent.

Now they have chosen to make a difference in the lives of Missouri S&T students.

“Barbara and I were lucky,” says Richard, who retired from Black & Veatch after a 39-year career as an engineer and expert in the construction of wastewater treatment plants. “Now we want to help others in the hope that they will do the same one day.”

Growing up on a small farm in upstate New York, Richard credits a high school teacher with recommending his collegiate path. “Private tuition was not something my family could afford, so a math teacher encouraged me to apply to a school of mines. That’s how I came to Rolla.”

The Jaquays’ have made a provision in their estate naming Missouri S&T a percentage beneficiary. Their estate gift will establish the Richard and Barbara Jaquay Rolla Rising Scholarship. “Earning a degree is tough enough without the added burden of worrying about how to pay for it,” says Richard.